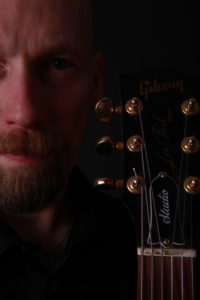 Stark Music is a small publishing company owned by myself (Janne Stark). It was mainly started for the publishing of my own music. I also, when time allows it, help bands find a label/distribution deal and have in the past done so for bands like Scudiero, ACT, Human Race, Burning Water, Fatal Attraction and Plankton, among others.

My musical background
I started playing guitar (or actually bass at first) around the age of 9-10, influenced by bands like The Sweet, Nazareth, Sir Lord Baltimore etc. I made my first demo recording with the local band TNT around 1978, my first 7″ with Paradize in 1979 and formed Overdrive in 1980. I have since made recordings with bands like Locomotive Breath, Planet Alliance, Zello, Mountain Of Power, Constancia, Grand Design, Zoom Club and guest spots on albums by Narnia, Chris Catena, Thalamus, Blinded Colony, Faith, M.O.B, Spearfish, Audiovision etc.

My writing background
I started writing for Backstage magazine around 1990, after having written some reviews and features in a local magazine. I later wrote for Kool Kat News, Tat N’ Roll, BLT, Hard Roxx, Sydöstran, Metal Zone, Sweden Rock Magazine, FUZZ Magazine etc. I have also contributed in various other magazines such as Scanbike, Frontline, The Midwestern Skies, Top 40, etc. I also had the local radio show Megaton for about a year. I currently, when time allows it, write for www.metalcentral.net as well as on my own reviews blog. In 1996 I released my first book, “The Encyclopedia Of Swedish Hard Rock And Heavy Metal 1970-1996” and the second volume in 2002. The third book, ”The Heaviest Encyclopedia Of Swedish Hard Rock And Heavy Metal Ever!” was released in 2013. I’ve also contributed to some other books and am currently working on the history of Swedish hard rock and heavy metal.

Today?
I’m still active in bands like Overdrive, Grand Design, Constancia, Mountain of Power and Zoom Club and I still write for metalcentral.net as well as my reviews blog. See the Links page for links.