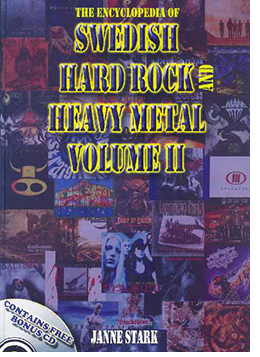 When my first book went to the printer’s back in 1996, I knew I had to write some type of up-date or second volume. I figured 5 years would be a pretty good time frame. Instead of just waiting until it was time, I immediately started collecting material. As soon as I read a review of some new Swedish band, or received a new promo, I entered the information in my computer. For some reason 2002 seemed to be a good year to release the new book. My aim was to have it ready for release at the main metal event in Sweden, the Sweden Rock Festival, June 7-9. Due to various reasons I decided to take some extra time and the release was set to August 2002. A few of the reasons for the delay are as follows:

– Labels and bands did not send promos and information as promised, or even answer my e-mails (Rage Of Achilles, hello?!).
– At the last minute a lot of labels decided they should release another bunch of records that I felt just HAD to be featured.
– After almost having given up, I decided I had to get hold of Joey Tempest to get an OK to use a Europe-song, which I finally did!

The book contains up-dates of the bands from the first band that had released new stuff, new bands and band’s I had missed, while bands that ”were resting/had split” since the first book, were only listed.